How to Take Care of Skin After Tattoo Removal

There are all sorts of reasons why people want to get rid of the tattoos that they have made at one point in their lives. Sometimes, those tattoos were just bad decisions, sometimes they are the names of people that they want away from their lives in all forms. In some cases, the nature of the new job requires for a tattoo to be gone. The reasons are many, but the solution is only one and that is that laser tattoo removal. This is a routine procedure that many people go through each day, so you don’t need to worry about its outcome. You can, however, pay some attention to the skin care after this procedure. Here are some tips on that.

The Procedure
It is most likely that you will be treated by a Q Switched Laser that is the most frequently used laser for this type of procedure. What will happen is that the two layered laser will be applied to your skin and it will get absorbed by the ink of the tattoo. While doing that, as the result of this treatment, the ink will disappear. The light of the laser breaks it into tiny bits that are taken care of by the body’s systems. The procedure is not completely painless but most people can endure it without anesthetics and they usually only use the numbing cream. It is not entirely painless but it far less painful than getting a tattoo. You can compare the pain with the pain caused by the hot waxing.

Things to Expect After Procedure
You can expect redness, blisters and itching sensations. That is all about your skin trying to repair itself from the laser treatment. The blister can be smaller or bigger, but you should restrain yourself from popping it or puncturing it. That is your skin trying to put protective layers on itself to stop the infection. After the blister calms down, the treated area will make scabs that should be also left alone until they do their part in the healing process. You can numb the pain with Tylenol, but avoid aspirin. Ointments and creams should be reduced to the smallest possible amounts. In the first 24 hours, it is best that you simply use ice packs and cold presses for not more than 15 minutes within the hours. Remember never to put ice directly to the skin. 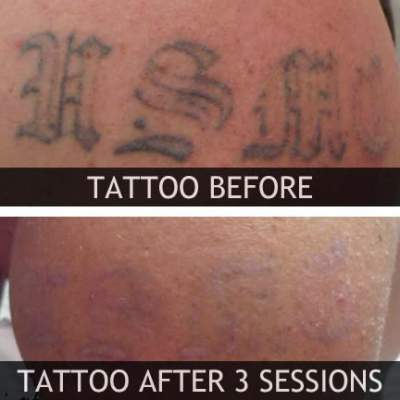 Expected Results: It is not advisable to use laser removal technique on the permanent makeup, but all other types of tattoos are prone to this type of treatment. One treatment will not be enough to completely remove the tattoo. It all depends on the type of ink and on the depth of the tattoo itself. You can get it done with anywhere from eight to fifteen treatments. Also, the results depend greatly on the color of the ink. Dark blue and black are easier to remove. After them comes the red and orange, while yellow and green are very hard to get rid of. You can expect up to 95% of the tattoo to be invisible after the treatment.

Skin Care after Procedure
First of all, you need to do all it takes to avoid inflammation or infection. This includes enabling the skin to take care of itself by enabling the blistering and scabbing to go undisrupted. Don’t spend time in situations that will compromise the scab. This includes soaking in water of any kind, spending time at saunas and similar things. For the first 48 hours after treatment, you need to avoid putting any kind of creams or ointments on it except the ones that are prescribed to you by your doctor.

After that, you should use the ones that contain Aloe Vera or Vitamin E to help the area heal. You will need to apply the SPF of at least 25 for the treated area and to avoid the next laser removal treatment for at least five weeks.

As it turns out, the laser simply helps the natural mechanisms of the body to remove the ink as a foreign body and heal itself in the process. This is the surest and the most thorough way of tattoo removal if you are disciplined and persistent.

How To Choose The Right Rug

How To Improve Warehouse Safety