How to Read Sheet Music (Piano)

For any beginner piano student, looking at sheet music is confusing and even a little intimidating. It seems mind-boggling that a complex series of lines, symbols, and musical notes could make up an entire piano piece. It’s like reading something in another language – and unfortunately, you aren’t fluent. The good news is that once you’ve got a basic understanding of what all those symbols mean – and how they translate to playing the piano – reading sheet music becomes much easier. Also, if you’re just starting out, you won’t be tackling complicated Beethoven or Mozart pieces, so don’t be too worried about advanced-level sheet music. It’s time to focus on the basics! 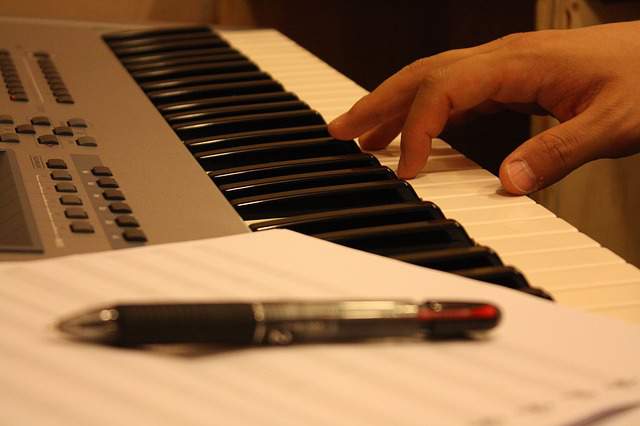 Let’s start with some of the fundamentals of reading sheet music:

The Staff and Clefs

The first thing you probably notice when looking at sheet music is the fact that all the notes and signs are printed on a set of lines. These five lines are called the staff lines, and they structure the musical piece. Instead of counting them down with the top line being line number one and the bottom being line number five, they count up – so the bottom line is actually the first, and the top is the fifth. The spaces between the lines are also counted the same way, one through four from the bottom up.

The bass clef, on the other hand, is for the lower register, and played with the left hand on piano. The bass clef staff line notes are labeled G-B-D-F-A. Some mnemonics to help you remember these are, ‘Good Boys Do Fine Always’ or ‘Good Boys Deserve Fudge Always’. As for the spaces on the bass clef staff, the note names are A-C-E-G. You can remember these using the mnemonics, ‘All Cows Eat Grass’ or ‘All Cars Eat Gas’.

If a musical note appears outside of the staff lines or spaces, it will sometimes have its own individual line through it. This is called a ledger line, and it denotes a musical note that falls between the treble clef and bass clef. For piano students, the “Middle C” note is kind of like your first letter of the alphabet, and it appears at the very top of the bass clef or the very bottom of the treble clef. You can place any number of ledger lines on a note to have it stay in treble or bass and go up or down, but eventually it just makes sense to switch to either treble or bass clef.

An accidental, on the other hand, is put in front of an individual note to indicate that it should be changed by a semitone. The two accidentals you’ll see are a flat (which looks like a lowercase letter b), which means that the note should be lowered by a semitone, and a sharp (which looks like a pound sign), which means that the note should be raised by a semitone. It’s important to note that if a sharp or flat sign appears in front of a note at the beginning of a measure, that note will stay sharp or flat for the rest of the measure.

However, sometimes you may see a strange box-like symbol – that accidental is a natural sign, meaning that the note that was previously marked at the beginning as a sharp or a flat should revert back to its normal tone. Whatever the case, the accidental’s effect only lasts for the length of the measure, which is marked by a vertical bar through the staff lines.

As for the key signature, it indicates the notation of the piece, and stands as a kind of cheat sheet for which notes are to be consistently played as sharp or flat. In piano, the key signature shows you the notes to play and not play.

Of course, accidentals – the flats and the sharps – come into play here as well. Setting a key signature is the composer’s way of making sure all the notes are played at the same tone, rather than marking individual notes with a sharp or a flat. Starting on the left-hand side and moving to the right, keys are determined by the number of flats, or sharps, in the key signature. Flats added to the key signature appear in the order, BEADGCF. Conversely, sharps are added in the order of FCGDAEB. It may sound tricky, but notice that the flat key signature order is simply the reverse of the sharp.

From Paper to Piano

Piano is often a music student’s first instrument, and for good reason – sheet music translates fairly smoothly from paper to keyboard. By getting a handle on the fundamentals, such as how to read the notation on the staff lines, the key and time signatures, and any additional flourishes that dictate how the music sounds, it can be easy to put together how sheet music sounds on piano. There are also plenty of resources available online – from video tutorials to cheat sheets – that can help you practice at home, and there’s no lack of in-person lessons available as well. Even if it feels like sheet music might as well be a foreign language, keep reading and practicing and you’ll be fluent in no time.

Curates useful how to articles, with rich media from scratch to expertise information about technology to home decorating, business, career and many more.

This blog is created in the year 2015 with the aim of curating informative step by step guide articles.  All the published articles you read on share how to was written by how to team members mostly and group of other guest bloggers outside share how to team.